It is reported that the first Troop in Highcliffe was started by Major Farquarson in 1911 and known as Highcliffe (General Stuart-Wortleys Own) Troop but closed in 1922. However a postcard exists of a Scout Troop, said to be the Highcliffe Troop, in 1909. It was sent through the post and post-marked “Highcliffe 27th May 1910”. It has been verified as being the Highcliffe Troop by the grand-daughter of one of the people in it, she is not sure when the photograph was taken but says 1909 would be “about right”. So, when did the Troop start? If the photograph is of the Highcliffe Troop, as seems probable, it must have started in 1909. 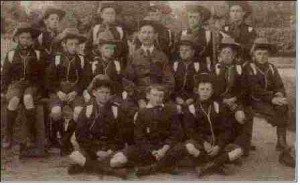 Records show that the Troop was re-opened by E.M. Sharp in September 1924 with 20 Scouts. Their headquarters being Waterford House in Highcliffe, the same address as the Scoutmaster. The Troop in fact met in a field at the back of Mr Sharp’s house in the summer and in the Church of England School in the winter. In 1928 the Group was re-registered as Group 3417, 1st Highcliffe.

Summer camps were held regularly from 1925 until 1936 and a Cub Pack was opened in 1931 with Mrs J.M. Bishop at Cubmaster. Mr Sharp continued as Group Scoutmaster and Scoutmaster and in 1940 also took over the running of the Cub Pack when others were called up for war service. He resigned in 1943 after nearly 20 years service with the group.

It is also reported that in 1939 the group was meeting in two rooms over the garage at “Mountjoy” in Montagu Road and that in 1946 they moved from The Vicarage stables to a headquarters at the rear of St. Marks Hall.

In 1947 the name of the group was officially changed to 5th Christchurch (Highcliffe) by the Group Scoutmaster at the time, Mr. A.E. Hentall. Lt. Col. Sewter became Group Scoutmaster in 1950 and after his death in 1953 the “Citizens of Highcliffe” presented a flag to the Troop in memory of “A Great Scout”. The Troop was then taken over by Jack Spalding assisted by Les Wheeler and K. Maidment.

A second Cub pack was opened in 1956 with Miss Joy Ellis as the new Cubmaster and Miss Pat Stockford running the other pack and in 1957 Reg Green became Group Scoutmaster when Jack Spalding became Assistant District Commissioner for Scouts. By 1965 the Group had reverted to one Pack run by Gladys Rhymes assisted by Amy Sque but in 1970 they again had to meet over 2 nights because of the number of boys wanting to be Cubs. In 1973 a new flag was presented to the Cub Pack by Mrs Thomas in memory of her son Raymond, a Queen Scout in the Group, who had been killed in a motoring accident. The flag was dedicated in St Marks Church. The Pack said farewell to Gladys Rhymes and Amy Sque after very many years of sterling service to Cub Scouting and to the Guide Movement.

In 1968 the new headquarters was opened on Chewton Common and it was extended in 1976, a new entrance porch being added and a new store built.

Jack Spalding, a former Scoutmaster and Group Scoutmaster of the Group died in 1976 and trophies for Cubs and Scouts were presented by his wife in Jack’s memory.

Ray Hoare became Scout Leader in 1970 and the Troop was soon flourishing because of his enthusiasm, numbers grew to over 60 Scouts in the Troop, split into 8 patrols. An archery club and a caving club were started and a full camping programme followed. Stephen Cratchley replaced Ray Hoare in 1977 but numbers started to fall after a while and in 1980 Graham Budd took over the Troop. In 1982 he instigated a “shake up” of the Troop with the result that only 12 boys remained and formed the basis of a better Troop. This worked well with the Troop going from strength to strength. Assisting Graham were Alan Jones, David Ward, Keither Gainor and later Tony Cumes forming a strong team. The Troop won the District Emlyn Trophy and the County Banner a number of times, camped at Kandersteg in Switzerland twice and had many boys taking part in the District Gang Show. Alan Jones became Scout Leader in 1986 followed by Robin Abbot in 1990.

In 1988 Derek Gainor, the Group Scout Leader, passed away after a long illness.

Venture Scouts met with the Troop from 1974 until Alan Jones took over the Unit in 1976. It closed in 1980. Graham Budd reformed the Unit in 1987 and ran it until 1992 when Kevin Jones took over. The Unit closed again in 1996 when Kevin moved away from Highcliffe. Over the years Venture Scouting has been very successful in Highcliffe, many boys have gained their Queen’s Scout Badge and many others have attended World Jamborees in different countries.

A new section, the Beaver Colony, was formed in September 1985 with 15 boys under the leadership of Jackie Jones. This number soon reached 24, with a waiting list and has remained there ever since. At the end of 1994 Sue Geddes followed Jackie as Leader and in 1996 Angela Budd became Beaver Leader.